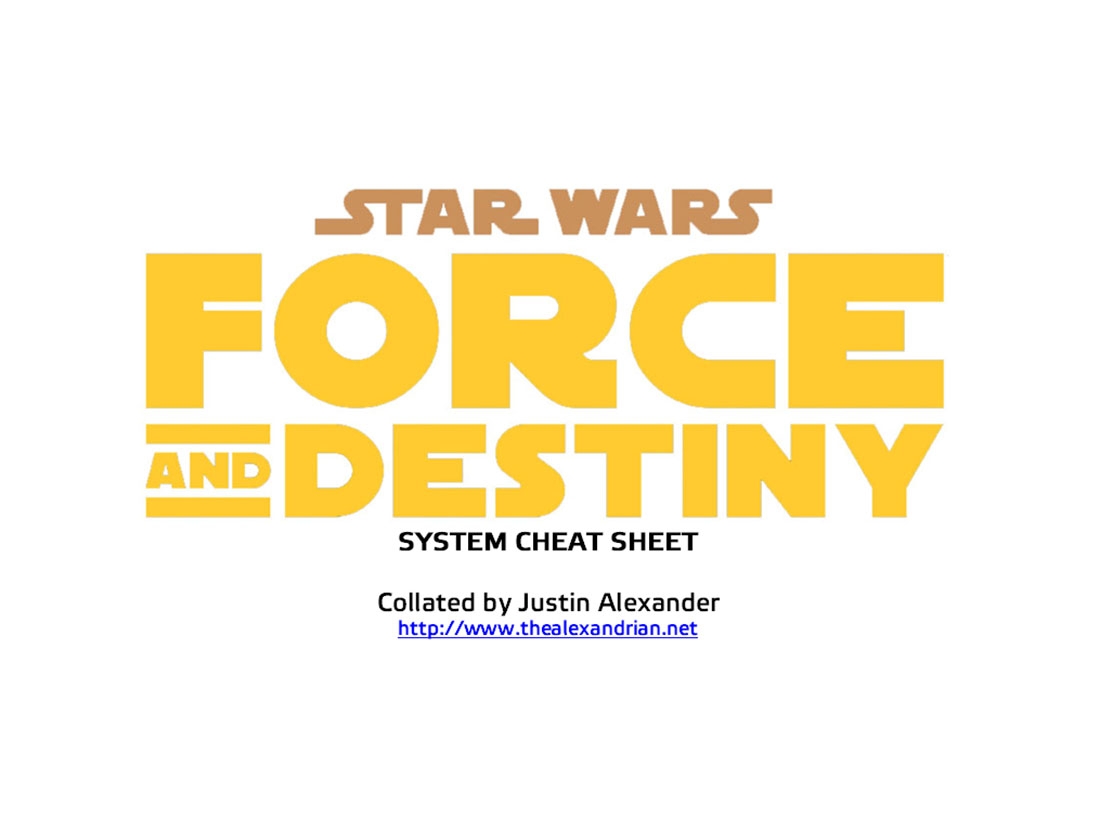 Skills cover most general applications of the Force like the infamous Jedi Mind Trick or Telekinesis. Force Feats expand on such abilities for more potent or specialized applications. For example, any Jedi can lift objects, but it takes a feat to create a freaking localized hurricane at will.

People who are not Force sensitive can channel it through the use of Force points which can be spent to add extra dice to their rolls not unlike Eberron's action points. Characters have two sets of "hit points". Vitality reflects the energy to get out of the way of blaster bolts at the last instant or that instinctual dodge from a lightsaber blade. It's basically plot armour in the sense that a character that still has Vitality can moon stormtroopers as they shoot at him and come out just fine.

Actually getting stabbed by a lightsaber subtracts from your Wounds which is equal to your Constitution score. And does not increase with level. You start actually bleeding when your Vitality which does scale with level is depleted or when you take a critical hit. This means that even the highest level badasses can go down like a punk with a few bad rolls that crit them.

Jedi expend Vitality to use the Force so there's a soft cap on the kind of bullshit you can conceivably pull with the Force. Many NPCs don't have a Vitality score which explains why heroes are great shots while the average extra can't hit the broad side of a Star Destroyer at fifty paces. The Revised Edition also had the special distinction of making the vast majority of characters into fragile snowflakes in a Tatooine summer.

Mainly because armour no longer adds to Armour class, but instead functions like Damage Reduction.

Sounds like a good idea in theory, so it takes special effort to mess it all up. Which is brilliantly achieved by making Armour DR only function on Wound damage. If you haven't caught on, your DR only functions when you are about a dozen points of damage from death in a setting when crazy people with laser swords are trying to cut your head off.

Even the most basic weapons deal 3d8 damage, so even with the heaviest armour, it's only a couple or so shots before you croak. It also hinders your DEX bonus which is one of the few things which does add to your AC or "Defense" as they term it here.

By the way, Jedi lightsabers ignore DR and most Jedi classes have their lightsaber damage scale with level. By the early double digit levels they are dealing damage on par with rocket launchers which is setting appropriate but also handily explains why they are the primary melee warriors in a setting where everyone else tends to pack a blaster.

If a Jedi crits you, it's usually time to roll another character. That said the game had its flaws, some of them can be considered quite serious. One common criticism is that the game is very "vanilla". Many classes gain all of their class abilities by roughly level 6, everything else was nothing more than a numerical improvement.

Aside from the Jedi classes, classes tended to have only a small handful of class abilities and some of those abilities were highly situational. This extended to the prestige classes; the Bounty Hunter PrC for example got the Ranger's Favoured Enemy which extended to his current bounty target which was nice but only to his current bounty target not so nice and the rogue's sneak attack. That's it, that's all you get as a bounty hunter in way of class abilities. Equipment too was basically a numerical improvement as opposed to the huge expansion of capabilities enchanted gear could offer to players more used to fantasy RPGs.

Most classes were also very "samey" with situational bonuses and a small list of bonus feats differentiating some of them. In a way think of it as a prototype to d20 Modern. As such overall, the game can get quite boring over time.

Any non-Jedi character slowly grows in powers they already have while a new feat can give Jedi a whole bag of tricks to unleash. BAB for a combat character rise at half that rate. Just Stormtroopers with even better aim, droids with more weapons, etc.

Even fielding Sith simply means that the party will focus fire and gun that sucker down. This leads to a major problem when parties get together. Everyone is pretty fragile but Jedi are so much more powerful than everyone else. Mixed parties tend to have many other characters overshadowed by the Force Users. All Force Users tends to have lots of overlap and can be hard to fit into the timeline if you use canonical Star Wars ie the Old Republic or the New Jedi Order; even worse if you intend to have plenty of Sith to fight at the same time.

All non-Force Users and you might as well be playing D20 Future. Movie conventions that protect major NPCs also do not exist; if Darth Vader shows up, there is every chance that the party will try to shoot him with proton torpedos from their vehicles if they can.

D20 took 3E's already too large skill list and made it bigger. While nobody has the dreaded 2 skill points a level, many things you could go without in 3E are now basic life skills. You need to be a master hacker to gather information on the internet. All but the most basic vehicle operations also require training.

In-fact even basic operations require training because astrogate is trained only. This is further turned into a mess by making force skills the unholy combination of of the Truenamer and Martial Adepts : Force skills require a skill check to function, but there are literally dozens of them. Unlike Martial Adepts these aren't mundane skills you've learned to an extent you can use them in combat Wax on, wax off , they have no consistent or rational attribute dependencies and they can only be used to burn vitality and turn it into an effect.

It gets worse still as despite having only enough books with crunch you can count them on your finger, and the only one that doesn't introduce a new one is Arms and Equipment Guide. In its short run it literally introduced more skills than 3.

Worse still precisely 1 Oriental Adventures 's Iaijutsu Focus of 3E's new skills was not tied to a sub-system, 2 if autohypnosis which is tied to Psionics and only given to them as class skills, but technically usable by anyone is counted.

All classes are locked into their class skills entirely until the feat Cosmopolitan in the Hero's Guide. Even with this feat you only got one extra skill.

This had a nasty way of hard locking characters into certain roles. While this was always the case in 3E's skill system until Pathfinder , it really stings after d20 Modern's starting occupation made it the one variant with an exception in the core rulebook.

Diplomatic skills were particularly locked down with Nobles and Jedi Consulars being the only people capable of asking nicely for things contrast 3rd edition where Bard, Cleric, Druid, Monk, Paladin and Rogue, over half the classes, were. Why Bother With It? About half of the books released for the system are actually lore books with zero or near-zero crunch, which are handy for any Star Wars campaign. There is a bend on the back cover.

Please see photos for exact condition. See details. See all 8 pre-owned listings. download It Now. Add to cart. Stephens , Paperback, Revised. About this product Synopsis Hokey religions and ancient weapons are no match for having a good blaster at your side. The galaxy is a dangerous place, and even the most capable heroes need the right equipment to get the job done.

Outfitting for a rescue mission on a frigid ice planet differs from gearing up for an assault on a crime lord's jungle world headquarters.

But with the right connections, and enough credits, heroes can acquire all the weapons and tools needed to survive any situation.

This sourcebook features: An arsenal of weapons and armor, along with rules for customizing and personalizing them. A wide variety of droids from across the galaxy, including the legendary R-Series astromech droids, binary load lifters, and the RA-7 "Death Star" droid.

Compare similar products. You Are Viewing.

Studiously neutral to the point that its employee regulations prevent membership in a political party. Bonus Feat At 2nd level, and again at 4th, the Imperial Moff gets a bonus feat. After the success of the Republic military forces during the Clone Wars, the art of cloning faded into relative obscurity.